My first night out bowhunting was in an area with primarily oak, hoping to time the acorn drop which had worked so well two years before.  That year, acorns were dropping the first day of season, and I took a decent buck that first morning.  It didn't work nearly as well this year, as opening day came about I found out the acorns had already dropped and what would have been a very promising area as the game cam had shown, had turned into merely an area.

Two weeks later and I have time to go out again...  This evening finds me in an abandoned farmyard, bordered by beans and CRP with a huge... no, a monstrous cattail slough within a half mile to the south.   This slough is probably 3 miles long by a half mile wide, and too the west is another cattail slough of about 40 acres in size.  These sloughs hold deer big time.  CRP usually also holds deer, but with this kind of great cover close by, most deer bed down in the cattails.   A few old apple trees in the farmstead are the delectable treat the whitetail love.   Twenty yards away, downwind from the prevailing wind, is our treestand.  This is where I was when a doe and fawn, along with a yearling came in to check on the apples.  I had seen them leave the large cattail slough to the south with my binocs, and watched them make their way to my position.  I seen others leave the cattails as well, but not all came up to the farmyard.  Some were grazing on the green sprouts of wheat tossed overboard from the combines which roamed the field weeks previously.  Closer to dusk, a nice buck exited the cattails and made his way towards my position.  Disappearing behind a hill left me hoping he was on a mission to find apples.  Soon I seen antlers bobbing and then he materialized less than one hundred yards from my position.  The  doe looked up to see him coming, then went back to her search for apples which had fallen from the tree.   Soon he was within 25 yards but he had his head towards me.  The fawn decided to check out what he seems to have found in the grass, and walked over as if he was going to share.  He chased her back to her mom, which left him at 19 yards and broadside.  When he took a step forward to sniff the apple tree and his head was obscured by a tree midway to him, I drew.  The other deer did not see the movement, so I settled in, picked my spot and sent a Beman MFX on it's way.  He ran off a little ways, then stopped.  The does had ran off and stopped to look back.  I was waiting for him to drop or start doing the weave, but neither happened.  I estimated him to be at 40 yards and broadside again, so I reached up to grab another arrow, nocked and let it fly.  It sounded like another hit, and he ran off to some nearby trees.  Adrenaline was going full force, so I had to stay sitting a little longer.  It would not have been safe to even try to climb down at this point.  After about ten minutes, I climbed down to find the first arrow.  It was right where it should have been, covered in bright red blood... the Magnus Buzzcut having done its job.  Walking over to the second shot area, ranging back to my tree showed a distance of 35 yards... so that shot was obviously high, but too high?  Maybe, maybe not.

It was about a mile and half walk back to my truck in the near dark, which almost had me walking into a skunk.  It wasn't until I was about ten yards away that I recognized the fuzzy thing sticking in the air was a skunks tail as he busily dug on a dirt mound.  We seen each other about the same time, with him deciding to go left as I cut right.  Calling my bowhunting buddy for help, was successful.  Hoping we would have an easy time finding him was not.  A quick look in the trees close to me netted no result.  The second arrow was found, which was fatty with a little blood, not a good sign.

Lanterns lit, using toilet paper to mark the blood spots worked well, until the spots turned to specks.  After about 100 yards, we lost the trail.  Back over the trail three more times to make sure we hadn't missed anything, we finally decided to call it a night since it was about 10:30 already.  The next morning, we found a speck of blood on a bean leaf entering the bean field.  A couple of hours searching and we find another speck about 15 yards past the first, and then a third.  By now it was nearing noon, and we broke for lunch.  Coming back with a black lab, we though he may be able to follow the trail through the beans, as find blood was very difficult.  Apparently there had been so much deer scent all over the bean field, that he was no help at that point.  It looked to me like the buck had been heading straight to the 40 acre slough, so the lab's owner and I took him down to the slough to see if he could find anything.  As he walked along the edge, in and out of the cattails, he found quite a few deer beds.  I was trying to keep up with him when suddenly he froze, then took two very cautious steps forward...  rushing up to him I found the buck which looked as if he had dropped on the run.  He was about 250 yards from where I had first hit him.  Inspecting him showed the first hit was good, maybe back a little more than it should have been, but well ahead of diaphragm.  The second shot had caught him as he took off, and was through his rump on one side, and exited his backside.  This must have happened as he jumped the shot, and was high because of my overestimating the range.  Either way, it didn't help him.  He wasn't a huge buck, but with my limited time to hunt this fall, I am quite pleased. 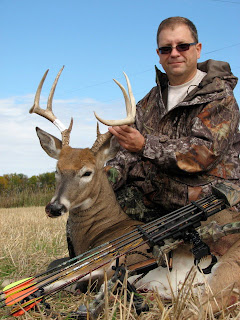 We now offer free shipping on all orders over $100 within the continental US.  I wish we could offer it to everyone else, but it just would not work at our prices.  So combine all the little things you need to get over $100, and we will send it out for free.  AND unless you live in Texas (where we are based) there will be no tax either!  That is a huge savings! 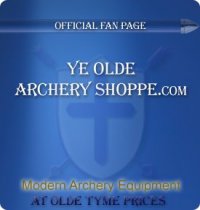 We are also now on Facebook!  Find us HERE

With summer just about here, it is time to get outside and enjoy the weather while flinging a few arrows at distances you cannot do indoors.  Getting the kids out of the house and having some family time is one of my kids favorite activities.


Although we carry nice 3D targets, like our Rinehart target that your club may use,  you do not need to spend a lot of money setting up a fun backyard range.  Backyard shooting rarely wears out targets at the same rate as club shooting, so less expensive 3D targets, such as those by Delta,  would save money and also allow the use replacement vitals should you eventually shoot it out.   Build one hanging spot target for sighting in using a 2x4 frame.  Morell has many hanging targets that are built to last.  Or for even more savings, stuff your own target!


But do not let money stand in your way of backyard fun.  Make your whole backyard range out of  hanging 3D bag targets, and save yourself hundreds of dollars.  Ames has rugged burlap 3D targets, just stuff and hang them.  In fact, if you have the lumber laying around, for less than the price of a single 3D target, you and your kids will be having a blast!

posted by Scott Gingerich at 10:14 AM 0 comments

This blog has moved


This blog is now located at http://blog.yeoldearcheryshoppe.com/.
You will be automatically redirected in 30 seconds, or you may click here.

Last evening I filled my bow tag.  I decided to move out of our normal bowhunting land back to my Dad's farm, where he had seen a few nice bucks hanging out as gun season was only two days away.  At about 5:30 a decent 4x4 came walking down the edge of the trees and worked a scrape.  I took a couple of pics of him working the scrape.

A couple of hours before I had practiced out to 60 yards and was shooting pretty decently.  I like to practice at distances greater than what I would shoot at, so when called to make a shot at half that distance in the field, it seems like an easy task.

He started across the field towards my direction but not real close. I almost blew it taking these pics, and was desperately trying to put down the camera and move my bow into position.  Ranging a couple yards in front of his path with the Bushnell Sport yielded a distance of 30 yards.  I hooked up my Truball Copperhead, putting the Hogg-It 30 yard pin on his chest, I made a grunt noise with my mouth stopping him long enough to send the Magnus Buzzcut tipped Beman MFX on its way.   What looked like a good hit had him run back into the trees, but he didn't look quite as chipper has he had when he came out.  Gapping his mouth was an indication that he wasn't getting enough air into his lungs, meaning it looked like a good hit.  I gave him two hours before going in.  He ended up only about 100 yards from the shot.

Here we are in the 2009 archery season again.  And hunting early seems to have paid off for one of our staff shooters.  Check out Max's 170 point 9x9 on our Customer photos page.  And yes, he is a customer as well as staff shooter.  Max's buck unofficially scored 171 and 169, so we'll call it a 170 until we get an official measurement.

I've only been out once with a Dark Horse hunting blind and my 7 year old son, Kelby.  We had a small 3x3 come by, and an ok 4x4.  I was debating on whether to take the 4x4, as I probably would have passed except Kelby was along with...  then I started a coughing fit, and I don't even smoke!  The more I tried to stop, the worse it got.  We probably scared him into the next county.

So perhaps this weekend I'll start to hit the field.

One of the things that we are going to tackle as far as the website goes is adding live inventory.  This has been one area that we have been lacking, and you have been great as far as calling in or emailing to check stock.  What we do not want to do is create a site that is harder to navigate, and our site navigation has been something that many of you like.   In the future months, I'll have a test site up that some of you can check out and comment on.  Look for that.

We've upgraded our fletching options for our custom arrows.  Many of the fletching prices have dropped, and the number of options have almost doubled.  For instance, now you can choose Blazer Tiger Vanes, or even just a cock vane in Tiger.  You can choose feathers with the cock feather being barred.  Vanetec VMax and Plastifletch Max are also now an option.  You can also fletch any arrow with Flu-Flu feathers if you choose.

Don't forget that you can also choose your fletching colors.  The instructions to do so are HERE.